Mary Shelley and the Rights of the Child: Political Philosophy in Frankenstein 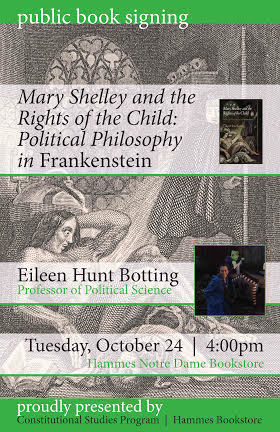 From her youth, Mary Shelley immersed herself in the social contract tradition, particularly the educational and political theories of John Locke and Jean-Jacques Rousseau, as well as the radical philosophies of her parents, the feminist Mary Wollstonecraft and the anarchist William Godwin. Against this background, Shelley wrote Frankenstein; or, the Modern Prometheus… 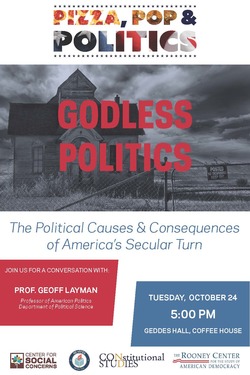 Join the Center for Social Concerns for a discussion with Prof. Geoff Layman and Prof. David Campbell, Department of Political Science. The last three decades have witnessed a rapid growth in non-religion and secularism in the United States. In their ongoing research, Professors Campbell and Layman focus on the political causes and consequences of this secular turn. Has politics helped to drive some Americans away from religion? And, what are the consequences of growing secularism for American political life?

Rod Dreher, author of The Benedict Option, will be presenting thoughts from the book on Thursday evening, October 26.

Event is free and open to the public.  Please join us at the Forum at 7pm.  Book signing to follow. 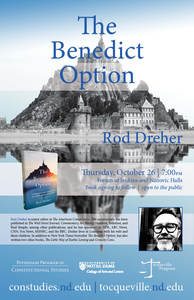 Read More about The Benedict Option

Please join us as we welcome General Michael Hayden, former director of the Central Intelligence Agency, to discuss, "Intelligence for a Rapidly Changing World: What's New and What's the Same."

This event is free and open to the public. 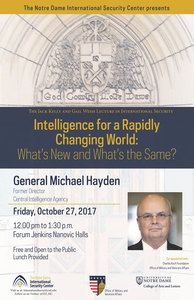 Read More about Intelligence for a Rapidly Changing World