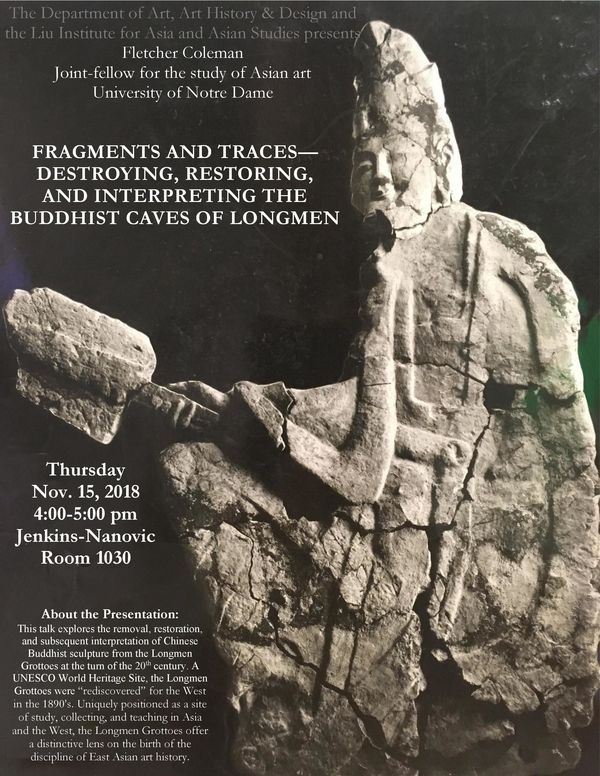 The Department of Art, Art History & Design and the Liu Institute for Asia and Asian Studies presents a lecture by Fletcher Coleman, joint-fellow for the study of Asian art at the University of Notre Dame.

This talk explores the removal, restoration, and subsequent interpretation of Chinese Buddhist sculpture from the Longmen Grottoes at the turn of the 20th century. A UNESCO World Heritage Site, the Longmen Grottoes were “rediscovered” for the West in the 1890’s. Uniquely positioned as a site of study, collecting, and teaching in Asia and the West, the Longmen Grottoes offer a distinctive lens on the birth of the discipline of East Asian art history.

Fletcher Coleman is a specialist on the religious arts of China, whose research spans the early medieval through early modern periods. His current project examines antiquarian conventions used by Western scholars in the formation of East Asian art history as an academic discipline in the U.S. circa 1900-1955. Focusing on the practices of plaster cast collecting in the West and ink rubbing in Asia, he argues that the intersection of these traditions became a foundation for early museum restoration practices and the teaching of East Asian art in America.