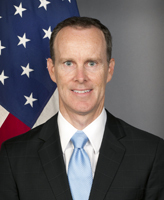 Douglas Griffiths ’86 has been a professional globetrotter for more than two decades—not collecting postcards but rather serving his country in U.S. diplomatic outposts all over the world.

Griffiths, who received his B.A. in government from the University of Notre Dame’s College of Arts and Letters, joined the U.S. Foreign Service in 1988. Under sometimes difficult circumstances, Griffiths has since represented the United States in places like Haiti, Africa, and Ecuador.

In July 2012, he was appointed U.S. ambassador to Mozambique, where he now leads an embassy of more than 100 American and 300 Mozambican colleagues, committed, he says, to building “a more prosperous, stable and democratic Mozambique.” 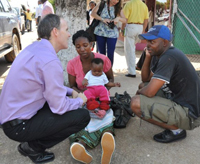 Griffiths is excited about his new role and the new level of responsibility it represents. “I have spent much of my career working on development and trade issues, and I speak Portuguese, so Mozambique is a perfect fit for me,” he says.

“The United States has an ambitious development cooperation program in Mozambique, and we are making impressive strides in fostering economic growth, reducing the transmission of HIV/AIDS, stimulating rural development, and improving education.”

After a long war of independence from Portugal and an exceptionally brutal civil war, Mozambique recently celebrated 20 years of peace. With enormous reserves of coal and natural gas, Griffiths believes Mozambique is on the brink of significant economic and social growth.

Despite improving standards and investment in its major cities, however, human development indicators are still low overall in Mozambique.

“Our goal is to help Mozambique invest its resources productively in their people.” 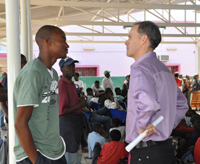 It was at Notre Dame, Griffiths says, that he first realized that his growing fascination with international affairs could turn into a meaningful and rewarding career.

“Studying abroad at Notre Dame’s Angers program really opened my eyes to the world and further stimulated my interest in other cultures,” he remembers. “Then through the Center for Social Concerns, I learned of a group of nuns who ran a school in a squatters’ community on a hillside in Puerto Rico. After college, I joined a group of Notre Dame students for a year of volunteer work as teachers there at Centro San Francisco.”

That experience confirmed his desire to pursue a career in international development, he says, while a class in the Department of Political Science with the now-retired professor Peter Walshe stimulated a life-long interest in African affairs.

A little serendipity didn’t hurt either.

“I did sort of stumble into the Foreign Service,” Griffiths says. “I happened to see one of my dorm-mates filling out an application for the Foreign Service exam, and I thought, ‘How cool, a test to be a diplomat.’” But Griffiths, a resident advisor at the time, had to chaperone a hall party the night before the test. “Naturally, I overslept. My very organized friend, who wisely slept off campus, had to leave without me. I hitch-hiked to the testing site.” 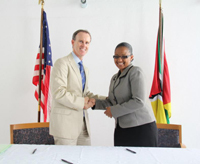 That somewhat inauspicious start aside, Griffiths will celebrate 25 years in the Foreign Service in January. “In that time, I have served in four continents and in cities all over the world,” he says.

But, he adds, “two periods stand out.”

Griffiths was assigned to the South Africa desk at the State Department just after Nelson Mandela’s election and during South Africa’s transition to democracy.

“I had front row seats for a heady moment in history and the privilege of working closely with an inspiring group of South Africans,” he recalls.

Griffiths also served as acting Ambassador in Haiti during its tumultuous return to democracy in 2004 though 2006.

“Americans should be very proud of our amazing success in supporting Haiti’s health system and providing treatment to people with HIV/AIDS,” he says. “It was particularly rewarding to work with Notre Dame alums, who were doing inspiring work in Haiti under difficult conditions.” 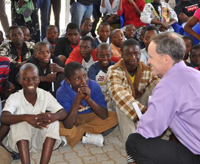 Griffiths’ family has grown alongside his career. His wife, Alicia ’86, and their daughters have become well accustomed to being in the diplomatic corps—and accepted this latest transition with enthusiasm. In fact it was his “intrepid” teenage daughters who advocated a return to duty in Africa, he says, “because they wanted to be back in a country where they could directly help people.”

Griffiths believes Notre Dame makes a great incubator for a career as a diplomat for just that same reason: the desire to assist others.

“Inculcated in a culture of service and solidarity with the poor and with so many study abroad options, Notre Dame students are perfect candidates for the U.S. Foreign Service,” he says.

“I could regale you for days with stories from our wanderings in the High Atlas Mountains of Morocco or hitch-hiking with nuns on the Azores islands,” he says. “The Foreign Service is a great adventure, but with a noble purpose of serving our country.

“It is very much a vocation,” Griffin says. “And serving in our nation’s interest and in the interest of the world is amazingly fulfilling.”