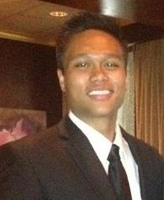 Hours of class each day and frenzied paper writing into the early dawn hours is practically a Notre Dame tradition during finals weeks in December and May. Less so in the middle of July, but this is exactly what senior political science major Angel Mira found himself doing this past summer.

Mira was one of just 20 students nationwide accepted into the American Political Science Association’s Ralph Bunche Summer Institute. The highly competitive program, held at Duke University, includes five weeks of intense study and research culminating in the completion of an original academic paper.

“It was very hard,” says Mira. “It was almost like having four finals weeks in a row.”

But despite a few sleepless nights, Mira thoroughly enjoyed the program, which seeks to introduce students to the intellectual demands of graduate-level research in political science.

The program consists of two core classes—one on race and politics, the other on statistical methods and analysis—and a series of lectures, seminars, and workshops. As a final project, each student writes a 25-page paper that explores an original hypothesis using newly acquired research methods.

“You combine intensive reading and research skills with regression analysis and the design of your own model and experiment, picking the right variables,” says Mira, who chose to focus on urban black poverty in relation to Latino immigration.

“I was hypothesizing that as the Latino population increased in metropolitan areas of the United States, black urban poverty would also increase,” Mira explains. “This is based on the fact that both groups have low human and social capital, especially in urban areas. Because both of them have similarly low-skilled demographics with low human capital, they would end up having socio-economic conflict.”

Mira’s finding refuted his hypothesis, but the research and the resulting paper were so well done that he was invited to present his paper at the American Political Science Association’s annual conference in New Orleans. Although the 2012 conference was cancelled due to Hurricane Isaac, it was still an honor to have been selected, he says.

“The program chose the top papers to present and that felt great because of all the hard work I’d put in,” Mira says. “And I couldn’t let ND down—you have to exceed expectations.”

At Notre Dame, Mira says his classes and academic research opportunities helped inspire him to pursue a graduate degree in political science.

“I like comparative politics,” he says. “I like researching countries that are democratizing from authoritarian regimes , looking at how countries besides the United States can formulate their own type of representative government.”

For the past year, Mira has worked with Political Science Professor Michael Coppedge on the Varieties of Democracy, a multi-year, international research collaboration based in the United States at Notre Dame’s Kellogg Institute for International Studies. The project aims to gauge the level of democracy in every single country since 1900.

Mira plans to continue working on this project while completing his senior year and applying to graduate school.

“Being at Notre Dame is sometimes difficult, you have to be on your ‘A’ game,” he says. “But Notre Dame has helped me figure out my intellectual interests, what I want to do with my life.

“My experiences here have been the foundation for everything I want to do in the future in terms of being able to tackle academic obstacles.”