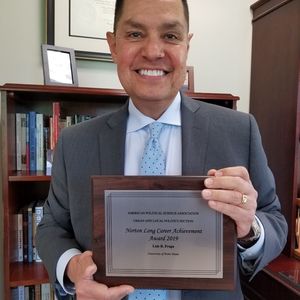 Luis Fraga, director of Notre Dame's Institute for Latino Studies, has been selected as the 2019 Norton Long Career Achievement Award winner for his work in political science by a committee of distinguished peers. The award is given each year to a scholar who has made important contributions to the study of urban politics over the course of a career.

The committee cited Fraga’s commitment to scholarly publication, mentoring of students and public service in their decision. In particular, they highlighted his role in promoting the inclusion of Latinx people as a central focus of the study of urban politics, noting that Fraga has co-authored five books and around 50 articles and book chapters on topics ranging from nonpartisan slating groups to the role of race, ethnicity, and education in politics. His key involvement with the Latino National Survey, a multi-generational and multi-state project, was cited as well.

“I have always understood my own career as being grounded in the study of cities in all of their magnificent complexity, challenge, and hope," said Fraga, the Notre Dame Professor of Transformative Latino Leadership, the Joseph and Elizabeth Robbie Professor of Political Science, and a fellow in the Institute for Educational Initiatives. "They continue to be the centers of opportunity for so many segments of our population including racial groups, ethnic groups, immigrants, businesses, and increasingly more and more middle and upper-class citizens. I have always loved being an urbanist. I will always love being an urbanist. I thank the Award Committee for this great honor.”

Beyond scholarship, his mentorship and teaching accolades at Stanford University, the University of Washington, and Notre Dame drew praise from the committee. They also noted his involvement with the Mexican American Legal Defense and Education Fund (MALDEF) and his appointment to President Barack Obama’s Advisory Commission on Education Excellence for Hispanics.

“Breadth, depth, focus, creativity, and impact—all are present in the career of Luis Fraga,” the committee said.“His impact comes through his demonstration of the importance of diversity and why it should be valued. His leadership and many efforts to bring about transformative change through scholarship, teaching, and service make him an especially meritorious and qualified Norton Long Distinguished Career Awardee.”

Originally published by Institute for Latino Studies at latinostudies.nd.edu on August 26, 2019.