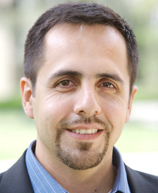 Ricardo Ramirez is joining the University of Notre Dame faculty as an associate professor of political science and a fellow at the Francis and Kathleen Rooney Center for the Study of American Democracy. A noted scholar of state and local politics, political behavior, and the politics of race and ethnicity, Ramirez is especially interested in how these issues related to participation, mobilization, and political incorporation.

Ramirez also brings with him a commitment to engage students in study of the growing impact of Latino immigrants on the American electoral process. Although his appointment does not begin until July 2011, he began teaching at Notre Dame this fall as a visiting associate professor.

“We are thrilled to have Professor Ramirez join us,” says David Campbell, director of Rooney Center and the John Cardinal, C.S.C., Associate Professor of Political Science. “He uses state-of-the-art social science to understand the nuances of Latino political behavior.”

Says Ramirez, “I try to uncover phenomena in a field where the older paradigm has usually been based on African Americans as minority voters. Politics are very different when you talk about immigrant communities because there are linguisitic issues as well as social and economic mobility issues,” he says. “That impacts people’s politics.”

His current projects include field experiments on the effects of elite mobilization efforts of Latino voters and on the role of gender and ethnicity on career paths in state legislatures since 1990.

“Ramirez attracted our attention because of the scholarly prowess he has already demonstrated and, as a relatively young scholar, for the work that is yet to come,” Campbell says. “In addition, he is a highly effective, even inspiring, classroom instructor.”

Next semester, Ramirez will teach a seminar for juniors called Latinos and the U.S. Political System and an upper-level course on Race, Ethnicity, and American Politics.

“I try to make the classes interactive,” Ramirez says, noting that the use of fresh, relevant data can be particularly exciting for students. “I try not to lecture at students but to force them to think about and question the work that’s out there. It’s criticism and analysis.”

Ramirez, who will also be involved with the University’s Institute for Latino Studies, says the faculty is what drew him to Notre Dame.

“It felt like a great synergy to be a part of the Rooney Center and to be a part of this University’s dynamic faculty,” Ramirez says. “Also, it felt right to be here in the Midwest, close to the research where immigrants are emerging as such a force in the electorate.”

Co-editor with T. Lee and K. Ramakrishnan of Transforming Politics, Transforming America: The Political and Civic Incorporation of Immigrants in the United States and author of many other articles, Ramirez completed a B.A. at the University of California, Los Angeles, and received his M.A. and Ph.D. at Stanford University.

The Rooney Center, which examines politics and policy making in the United States, hosts conferences on themes related to American politics, assists graduate students who work in the field, and supports the University’s Washington Program, which allows undergraduates to spend a semester interning in the nation’s capital.