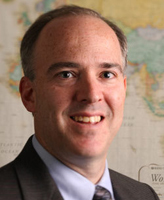 From Cairo to Kabul to New York City, the events shaping our world are informed by the deeply held religious beliefs of contemporary history’s major protagonists. So why is the dynamic role of religion in world affairs still such a hard academic sell in political science and international relations programs around the country?

“I think if the field were to be proportioned according to what you see in headlines, religion would deserve a much larger place in the study of international relations,” says Daniel Philpott, who is associate professor of political science and peace studies at the University of Notre Dame and on the faculty of the Kroc Institute for Peace Studies.

Philpott, co-author of the 2011 book God’s Century: Resurgent Religion and Global Politics, has devoted his academic career to studying the force of faith in propelling global events, what he calls a “cottage industry” within political science.

The subdiscipline did begin to draw more attention following the terrorist attacks of 9/11, he says, but it’s an arena of international relations that stubbornly resists the academic attention appropriate to its historic relevance.

And this lack of scholarly attention creates an interesting opportunity, Philpott believes. 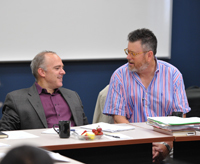 “It’s exciting to be on the cutting edge of a field that people are only starting to pay attention to,” Philpott says. “We get to help define what the discipline is going to mean.”

A new initiative at Notre Dame promises to advance that process of definition: In 2010, with a $657,000 grant from the Andrew W. Mellon Foundation, the University’s College of Arts and Letters launched Religion Across the Disciplines, a multi-year, international project that brings faculty and graduate students together with other scholars from around the world to investigate the influence of religion in history, international relations, literature, music, and sociology—as well as the influence those fields have on religion itself.

At the end of the process, Philpott says, the working group will issue a white paper “outlining where the field has been and where it might go.” 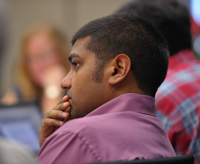 At an intellectually serious Catholic university such as Notre Dame, faith and its relevance do not have to be defended, Philpott says, which makes the University a “perfect site” to host this important dialogue.

This was also what drew Nilay Saiya to Notre Dame’s graduate program. Participating in the working group, he says, “has allowed me to build upon this solid educational foundation by giving me an opportunity to network with and learn from the foremost scholars in the field.”

Saiya has taken an active role in the project, keeping record of the working group’s discussions, drafting memos, and commenting on the white paper that will be published after the final meeting.

“My conversations with these individuals have enabled me to greatly strengthen my own work on religion, American foreign policy, and religious terrorism,” he says. “I expect that the connections I have made as part of this experience will last into the future as I enter academia and continue my research on topics related to religion and international relations.”

Collaborative efforts like Religion Across the Disciplines are important, Saiya says, because they provide an opportunity for specialists to come together in a series of organized meetings to take stock of the field and lay out the most important and interesting questions yet to be examined.

“Notre Dame aspires to be a center for the study of religion and how it penetrates the various academic disciplines that are part of this program,” Philpott says. “I think we can show real leadership on this kind of research, and the document we produce could be pivotal for the contemporary study of religion.”