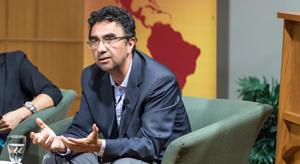 Guillermo Trejo, Kellogg Institute Faculty Fellow and Associate Professor of Political Science, has received the Editorial Board Best Paper Award from the journal Comparative Political Studies for a co-authored article, “Why Did Drug Cartels Go to War in Mexico? Subnational Party

Alternation, the Breakdown of Criminal Protection, and the Onset of Large-Scale Violence.” The article was published in August 2017 in Comparative Political Studies, and was selected for the honor from among approximately 56 other articles. It explains why Mexican drug cartels went to war in the 1990s, even though the government wasn’t pursing a major anti-drug campaign.

Trejo and his coauthor Sandra Ley recently co-authored another article, “High-Profile Criminal Violence: Why Drug Cartels Murder Government Officials and Party Candidates in Mexico,” published by the British Journal of Political Science on Sept. 5, 2019. The article examines the reasons behind a puzzling wave of lethal attacks by drug cartels against hundreds of local politicians in Mexico from 2007 to 2012.

Originally published by Rowland, Ashley at conductorshare.nd.edu on September 11, 2019.