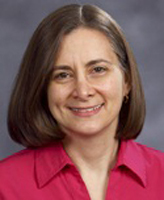 Bringing her latest research into the classroom, Debra Javeline, associate professor in the Notre Dame’s Department of Political Science, is helping undergraduate students make a connection between politics and biology.

Javeline’s new course, The Politics of Adapting to Climate Change, was born of the work she is doing with Notre Dame biologists Jessica Hellmann and Jason McLachlan to measure the scientific community’s opinions about managed relocation, a developing mode of wildlife conservation that involves moving threatened species from their natural but changing habitats to new, more climatically suitable ones.

“What’s interesting is that because the class is based on real-time research, I don’t always have an answer for students,” Javeline says. “I can’t say, ‘Having done all this research, I know that managed relocation works and that it’s a good idea.’

“But,” she adds, “it’s a great starting point for conversation.”

Javeline, an expert in survey research, has spent much of her career focusing on mass political behavior and the politics of post-Soviet and other post-communist regimes. About four years ago, Hellman and McLachlan sought her survey expertise for their adaptation to climate change initiative, and the “side project” soon became a major interest.

“Climate change adaptation—the reduction of vulnerability to climate change—is perhaps the single most understudied political world problem,” Javeline says, “and I would like to devote a significant portion of my future scholarship to correcting this deficit.”

To further her work in this area, she has received grants from the National Science Foundation as well as the College of Arts and Letters’ Institute for Scholarship in the Liberal Arts.

She was also awarded an Andrew W. Mellon Foundation New Directions Fellowship, which assists faculty members in the humanities and social sciences “who seek to acquire systematic training outside their own areas of special interest.” The fellowship allowed her to expand her knowledge base by taking courses across Notre Dame, tackling everything from advanced biology and environmental risk to environmental law and climate change law.

As a political scientist, Javeline says she is deeply interested in the political ramifications of climate change, and her new course focuses on just those sorts of questions.

She draws on her research with Hellmann and McLachlan, as well as work from other scholars, to form the course’s core. Her students then study this material, and analyze it from multiple angles—including that of a political scientist and a policy maker.

Students in the class also get the mind-opening opportunity to engage with research outside their primary discipline.

“I don’t think many political scientists have occasion to think this much about science and how you need to bring science into policy,” Javeline says.

Senior Chelsea Nobriga, a major in political science and environmental science, says the class has given her new insights into the understudied intersection between politics and climate change.

“I really have enjoyed getting a different perspective on climate change from an unlikely source: a political scientist,” she says. “There needs to be more interdisciplinary collaboration surrounding climate change so that meaningful and sustainable methods to adapt to climate change can be implemented.” 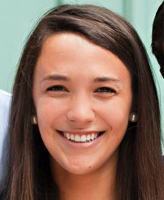 Sophomore Christina Gutierrez, who studies political science, French, and Italian, says the course has opened her eyes to the complexity of adapting to climate change.

“I’ve learned how incredibly difficult decisions and policies can be to instate, particularly as they relate to the short-term and long-term effects of climate change.”

The real-time aspect of the class is particularly exciting, she adds. “We’re not depending on textbooks that were published years ago for information but rather up-to-date documents that we know are being used to make decisions in policy right now in the U.S. and the rest of the world.”

Javeline says that the questions the course poses are difficult and that straightforward answers are hard to come by, if not impossible. But for students, she says, learning how to thoughtfully consider these problems is critically important.

“This is hard. It is a huge puzzle, and no one has easy answers,” she says. “But my students now have a foundation to engage these questions.

“Policy makers don’t always have evidence at their disposal, and sometimes they have to make decisions anyway. The class is a place to discuss that: how you make decisions in positions of uncertainty.”