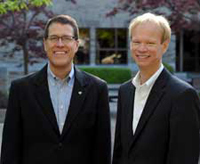 Two Notre Dame faculty—Robert Dowd, C.S.C., assistant professor of political science and director of the Ford Family Program in Human Development, and Paul Kollman, C.S.C., associate professor of theology—have been awarded a $100,000 grant from the Pentecostal and Charismatic Research Initiative (PCRI) of the University of Southern California (USC). Their project was one of only 21 to receive funding, selected from more than 500 applications.

“Religion is often overlooked when we think about what explains political behavior,” says Michael Desch, professor of political science and chair of the Department of Political Science. “A collaboration between a political scientist like Father Dowd and Father Kollman, a theologian, is sure to provide a new perspective on the rise of the charismatic movement in our faith and the impact it is having on the politics of Africa.”

The grant will support Dowd and Kollman’s study of the Roman Catholic Charismatic Movement (RCCM) in sub-Saharan Africa. Their research focus will be on Kenya, Nigeria, and South Africa, countries that are among the most politically and economically influential in their regions and where the Catholic Church has a strong institutional and cultural presence.

“There is reason to believe that more people spend more time gathered in religious communities in sub-Saharan Africa than anywhere else in the world,” Dowd says. “We cannot help but wonder why certain religious movements are more popular than others and how participation in these religious movements is affecting the social, political, and economic attitudes of those who belong to them.”

Kollman adds, “This study will help us to identify conditions that make the Catholic Charismatic Movement especially strong in sub-Saharan Africa and to assess the impact of this movement on the future of the Catholic Church there, along with the prospects for economic growth, development, and democracy in the region.”

Building on a network of contacts from their previous work in Africa, Kollman and Dowd will conduct in-depth interviews with charismatic and non-charismatic Catholic leaders and will observe Catholic charismatic meetings. The qualitative data they gather will be used to implement a survey of Catholics as well as other charismatic and Pentecostal Christians.

PCRI, funded by the John Templeton Foundation, is an initiative of the Center for Religion and Civic Culture, a research unit of the College of Letters, Arts & Sciences at USC. The initiative “provides a scholarly framework to investigate Pentecostalism and the various charismatic renewal movements that have emerged in Roman Catholicism, various Orthodox traditions, and mainline Protestantism.”

The Templeton Foundation strives to be a philanthropic catalyst for discovery in areas engaging life’s biggest questions, ranging from explorations into the laws of nature and the universe to questions on the nature of love, gratitude, forgiveness and creativity.