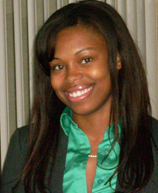 The award is named in honor of an undergraduate student at Tuskegee University who was killed when he attempted to use a “whites only” restroom during the civil rights movement of the 1960s. It honors the most innovative student paper dealing with race issues.

Cody says she was inspired to research this topic after polling data from the 2008 presidential primaries showed that some people believed Barack Obama was a Muslim.

“I was perplexed by the consistent finding that 10 percent of Americans perceived Obama as Muslim, even in the face of conflicting information, and repeated attempts by the campaign to clarify misinformation,” she says. “I wanted to understand the role of politics in fostering and influencing the attitudes of a few, if the people who incorrectly believe Obama is Muslim were different in some politically meaningful way, and what consequences this misperception presented, if any.”

Cody says the research paper, which she is revising for potential publication in a political science journal, is about understanding people’s perceptions versus political reality.“How does politics influence perception, and what are the mechanisms that foster the processing of information about people and politics in a biased fashion in accordance with social and political predispositions? What are the potential political consequences?”

Prior to coming to Notre Dame, Cody received a bachelor’s degree in political science from Rutgers University and worked as a research associate, creating and conducting surveys for a nonprofit opinion firm called Public Agenda. As a graduate student, Cody works closely with Darren Davis, associate vice president for research and professor of political science and psychology. She also counts as a mentor Dianne Pinderhughes, Notre Dame Presidential Faculty Fellow and Full Professor in the departments of Africana Studies and Political Science.

“In general, the American Politics faculty serve in a mentoring and advising role,” Cody says, “and have given me a lot of guidance.”

Cody, in her academic pursuits, plans to continue to explore her research interests in public opinion and political psychology. “I am generally fascinated by human behavior as it relates to politics because our human cognitive processes are the same, and what produces different outcomes with respect to political behavior are our different experiences, in addition to the various political/social environments and contexts in which we operate and develop,” she says. “It has always been interesting to me to study individuals because these are the actors in politics.”