This Undergraduate Student Spotlight comes from Erik Wang, who will be graduating after the Fall 2013 semester. He is the winner of this year's Guillermo O’Donnell Prize and was recently a presenter at MPSA. 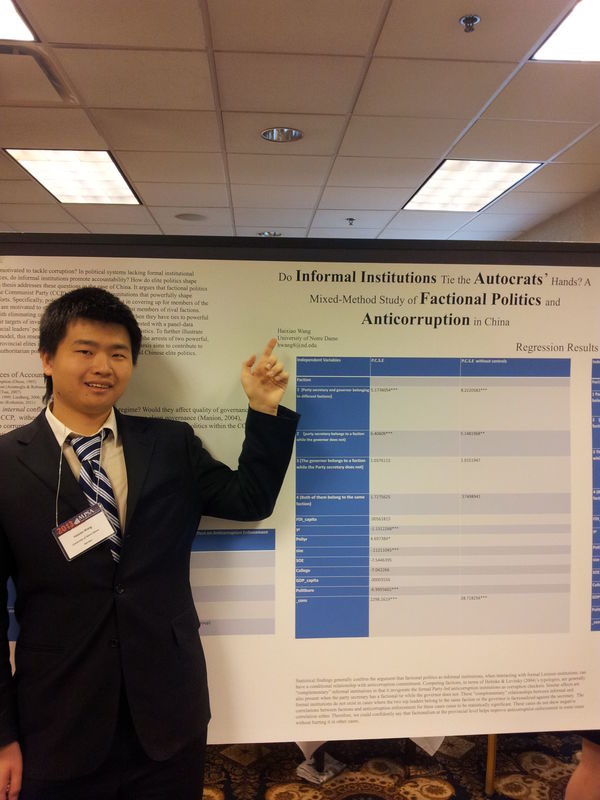 1. What initially attracted you to declare a Political Science major?

-"Since childhood, I have been interested in history and politics. Despite originally majoring in accounting at Notre Dame, I knew that my passion was still in social sciences. Thus, in the fall of my sophomore year, I began working as a research assistant for Professor Michael Coppedge under Kellogg’s International Scholars Program and also took Professor Sebastian Rosato’s “Intro to International Relations”. I found these experiences thoroughly fascinating and decided to switch my major to Political Science."

2. What do you enjoy about studying Political Science?
-"What I like the most about Political Science is its theoretical and empirical rigor. I enjoy going through the typical process of writing a research paper in the discipline: find any phenomenon that interests me, read scholarly works on this phenomenon, develop my own theory to explain it, and then test my theory with data and historical cases. I personally have a pretty strong normative opinion on what an ideal world should look like, but I am more interested in learning about how the real world works. The empirical aspect of Political Science satisfies my curiosity."

3. What Political Science classes have you taken that have been of particular interest to you?
-"I honestly love every class taken in the department. I especially enjoyed Victoria Hui’s class “Contention in China”, which helped me understand how oppressed citizens protest in China and how the regime responds to challenges from below. I would also recommend Professor Sebastian Rosato’s “On War”, which offered a great in-depth overview of the literature on the causes and conduct of war. Professor Villa’s “Intro to Political Theory” is also one of my favorites. It challenged me to think in the minds of influential political philosophers such as Arendt, Machiavelli, and Tocqueville. Although it is the empirical part of the discipline that interests me the most, I will never forget this philosophical journey."

4.Where do you hope to go with this major? Career path?
-"Since I took a semester off back in Beijing to work in a policy research institute, I will be graduating next semester. Next semester I will also submit my applications to PhD programs in Political Science. Studying Political Science from Notre Dame professors has been a highly intellectually rewarding experience. I hope to pursue a career in research and teaching, similar to that of my professors."

6. Can you talk about the grant you won to attend MPSA?
-"MPSA accepted my proposal and offered me an opportunity to present a poster on my research at its annual conference in Chicago. Through the International Scholars Program, I received a generous grant from Kellogg to cover the expense of my four-day stay in Chicago. The date of my presentation is April 13. I will be presenting a draft of my senior thesis titled 'Do informal institutions tie the autocrats’ hands? A mixed-method study of factional politics and anticorruption in China.'”