John Danford of Loyola University Chicago will be presenting a talk entitled “’They ask of him only that they not be oppressed’: Hume's Philosophy for the Vulgar”on Monday, April 18, 4:30PM in DeBartolo Hall 129. 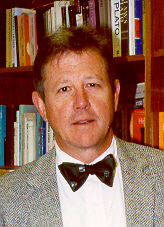 Professor Danford will argue that teachers of political theory ignore the thinkers of the Scottish Enlightenment because what they offer is philosophy for the vulgar. Through a discussion of what Hume has to say about leisure, commerce and the political class, with reference to Jonathan Swift’s Gulliver’s Travels, among other works, Professor Danford aims to challenge the current boundaries of political science.

Professor Danford's teaching and research interests include political theory (ancient, modern, and contemporary), and philosophy of science and social science. He is author of Wittgenstein and Political Philosophy, David Hume and the Problem of Reason, and Roots of Freedom: A Primer on Modern Liberty. He has published articles in American Journal of Political Science, Journal of Politics, and Political Research Quarterly.