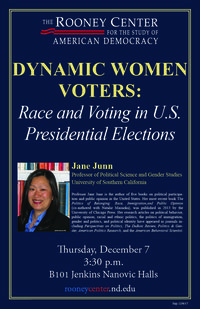 Jane Junn is a Professor of Political Science and Gender Studies at the University of Southern California. She is the author of five books on political participation and public opinion in the United States. Her most recent book The Politics of Belonging: Race, Immigration,and Public Opinion (co-authored with Natalie Masuoka), was published in 2013 by the University of Chicago Press. Her research articles on political behavior, public opinion, racial and ethnic politics, the politics of immigration, gender and politics, and political identity have appeared in journals including Perspectives on Politics, The DuBois Review, Politics & Gender, American Politics Research, and the American Behavioral Scientist.