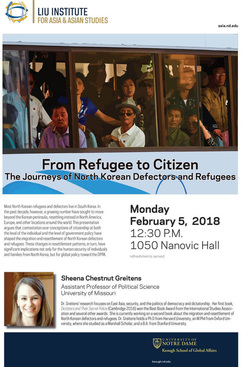 Most North Korean refugees and defectors live in South Korea. In the past decade, however, a growing number have sought to move beyond the Korean peninsula, resettling instead in North America, Europe, and other locations around the world. This presentation examines the factors that have contributed to the emergence of this new, global North Korean diaspora, arguing that contestation over conceptions of citizenship at both the level of the individual and the level of government policy have shaped the migration and resettlement of North Korean defectors and refugees. These changes in resettlement patterns, in turn, have significant implications not only for the human security of individuals and families from North Korea, but for global policy toward the DPRK.

Dr. Sheena Chestnut Greitens is an assistant professor in the Department of Political Science at the University of Missouri. Her research focuses on East Asia, security, and the politics of democracy and dictatorship.  Her first book, Dictators and Their Secret Police (Cambridge 2016) won the Best Book Award from the International Studies Association and several other awards.  She is currently working on a second book about the migration and resettlement of North Korean defectors and refugees. Dr. Greitens holds a Ph.D from Harvard University; an M.Phil from Oxford University, where she studied as a Marshall Scholar; and a B.A. from Stanford University.

This event is free and open to the public. Refreshments will be served.